Observations and computer simulations of their orbits and interactions with planets yield insights into the asteroids’ dynamic lives.

Sarah Greenstreet is a senior researcher with the B612 Asteroid Institute in Mill Valley, California, and a research scientist with the Dirac Institute at the University of Washington in Seattle. 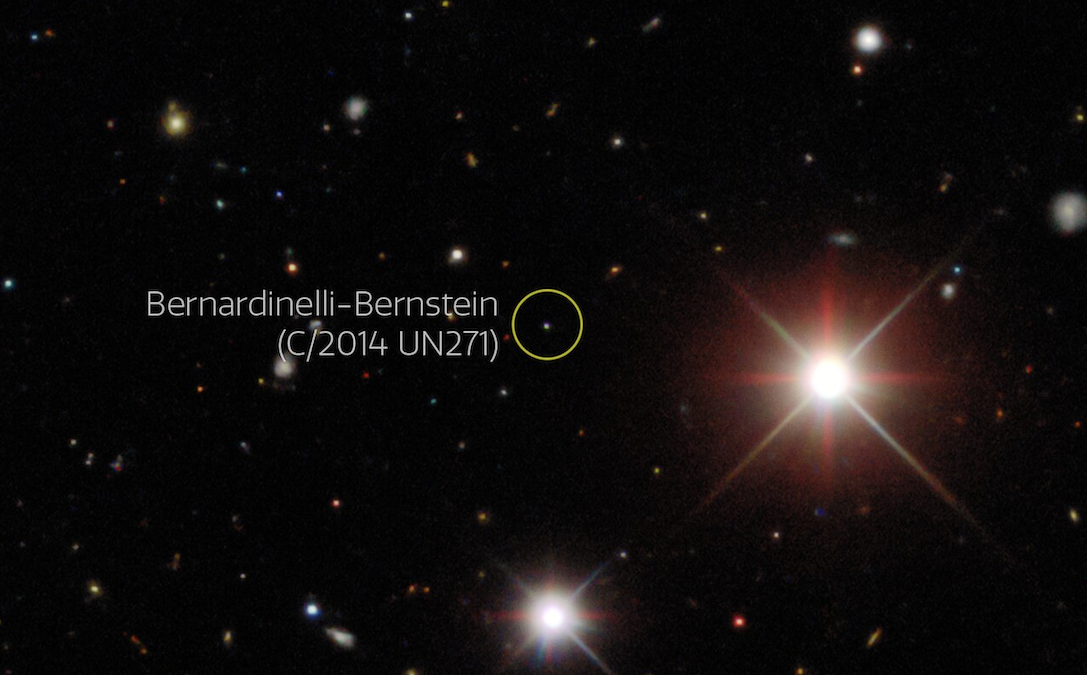 In October 2023 a new telescope in Chile called the Vera C. Rubin Observatory will begin a 10-year survey of the entire overhead sky called the Legacy Survey of Space and Time (LSST). “Typical telescopes find objects out to 50 or 60 AU,” says LSST team member Mario Jurić of the University of Washington. “With LSST, we can easily go out to 150 AU. We’re going to see things like [the Bernardinelli-Bernstein comet] maybe on a monthly basis.”

A team led by Dr. James Davenport, research assistant professor of astronomy at the UW and associate director of the UW’s DIRAC Institute, analyzed more than 125 years of observations of HS Hydra – from astro-photographic plates in the late 1800s to 2019 observations by TESS – and showed how this system has changed dramatically over the course of just a few generations. The two stars began to eclipse in small amounts starting around a century ago, increasing to almost full eclipses by the 1960s. The degree of eclipsing then plummeted over the course of just a half century, and will cease around February 2021.

The sun is the only star in our system. But many of the points of light in our night sky are not as lonely. By some estimates, more than three-quarters of all stars exist as binaries — with one companion — or in even more complex relationships. Stars in close quarters can have dramatic impacts on their neighbors. They can strip material from one another, merge or twist each other’s movements through the cosmos.

And sometimes those changes unfold over the course of a few generations.

That is what a team of astronomers from the University of Washington, Western Washington University and the University of California, Irvine discovered when they analyzed more than 125 years of astronomical observations of a nearby stellar binary called HS Hydrae. This system is what’s known as an eclipsing binary: From Earth, the two stars appear to pass over one another — or eclipse one another — as they orbit a shared center of gravity. The eclipses cause the amount of light emitted by the binary to dim periodically.

Continue reading this article by James Urton in the UW press release here.

Accurate photometric redshift (photo-zz) estimates are essential to the cosmological science goals of the Vera C. Rubin Observatory Legacy Survey of Space and Time (LSST). In this work we use simulated photometry for mock galaxy catalogs to explore how LSST photo-zz estimates can be improved by the addition of near-infrared (NIR) and/or ultraviolet (UV) photometry from the Euclid, WFIRST, and/or CASTOR space telescopes. Generally, we find that deeper optical photometry can reduce the standard deviation of the photo-zz estimates more than adding NIR or UV filters, but that additional filters are the only way to significantly lower the fraction of galaxies with catastrophically under- or over-estimated photo-zz. For Euclid, we find that the addition of JHJH 5σ5σ photometric detections can reduce the standard deviation for galaxies with z>1z>1 (z>0.3z>0.3) by ∼20%∼20% (∼10%∼10%), and the fraction of outliers by ∼40%∼40% (∼25%∼25%). For WFIRST, we show how the addition of deep YJHKYJHK photometry could reduce the standard deviation by ≳50%≳50% at z>1.5z>1.5 and drastically reduce the fraction of outliers to just ∼2%∼2% overall. For CASTOR, we find that the addition of its UVUV and uu-band photometry could reduce the standard deviation by ∼30%∼30% and the fraction of outliers by ∼50%∼50% for galaxies with z<0.5z<0.5. We also evaluate the photo-zz results within sky areas that overlap with both the NIR and UV surveys, and when spectroscopic training sets built from the surveys’ small-area deep fields are used.

Many surveys use maximum-likelihood (ML) methods to fit models when extracting photometry from images. We show that these ML estimators systematically overestimate the flux as a function of the signal-to-noise ratio and the number of model parameters involved in the fit.

Paper published by DiRAC Researcher, Dr. Sarah Greenstreet. Dr. Greenstreet is a joint postdoctoral fellow with the Asteroid Institute, a program of B612, and the DiRAC Institute at the University of Washington. Her research interests include the study of orbital dynamics and impacts of small bodies in the Solar System.

Months ago, a team of scientists led by Sarah Greenstreet (B612 Asteroid Institute and University of Washington) conducted a study in which they made predictions for the crater count they expected to find on MU69’s surface. Greenstreet and collaborators used observations of Pluto and Charon’s surfaces and models of known Kuiper-belt populations to explore the bombardment of MU69 over the solar system’s life span and calculate the number of craters of different sizes its surface should host.

The authors’ results were intriguing: they found that, despite getting bombarded for 4+ billion years, MU69 should be marred by very few craters. Greenstreet and collaborators estimate that MU69 should have only ~25–50 craters larger than ~200 m in size, which is the smallest size we’re likely be able to see with the full-resolution New Horizons images.

Read a related story in GeekWire