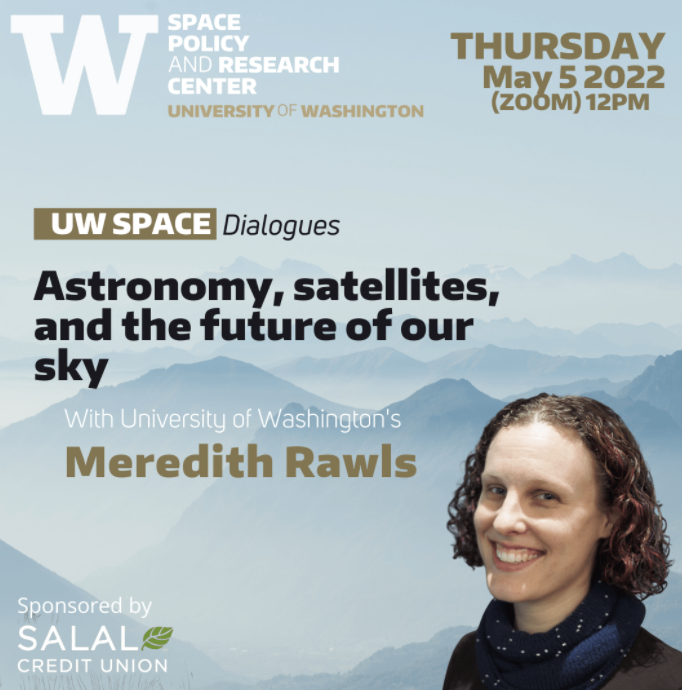 Astronomy, satellites, and the future of our sky

Join us Thursday, May 5th at Noon PDT on Zoom

We are witnessing a new era as skies fill with thousands of low-Earth-orbit satellites that reflect sunlight. Observational astronomy at all wavelengths is increasingly affected, and so is the shared human experience of the night sky. For optical ground-based astronomy, the impacts of satellites are worst for large wide-field facilities. One urgent example is Rubin Observatory in Chile, which will begin a ten-year sky survey in 2024. I will discuss how satellite streaks can impede discovery, and share recent studies that aim to better quantify this. Finally, I will describe the work underway by a dedicated international team to understand, disseminate, and mitigate the impacts across the electromagnetic spectrum for increasingly broad groups of stakeholders.

Bio:
Meredith Rawls is a research scientist in the Department of Astronomy and DiRAC Institute at UW. She writes software and data pipelines to handle terabytes of nightly images from Vera C. Rubin Observatory’s Legacy Survey of Space and Time, which will produce the highest resolution movie of the night sky ever made. Her background is in stellar astrophysics, and she earned her PhD from New Mexico State University. Lately she studies the plethora of newly-launched commercial satellites in the hopes observers worldwide don’t lose the sky. She has served on and chaired working groups and coauthored reports for numerous astronomy workshops on satellite constellations, and she is spearheading the SatHub initiative at the new International Astronomical Union Centre for the Protection of the Dark and Quiet Sky from Satellite Constellation Interference.